Slow transfer rates with openVPN on pfsense with dropped pings

IT Support Articles IT Admin Guides

We ran into an issue recently with transferring files between a server and a workstation. They were connected via openVPN client and a pfsense router running OpenVPN server. We found that when pinging the pfsense from the connected client, pings worked fine. The main issue came however when we attempted to copy a file from the server to the client.

We found that the file would transfer a few percent and then stop. A constant ping to the server which we had running in the background would stop for about a minute and then resume. This cycle repeated itself with the file copy operating eventually failing. We tried changing MTU settings and various other settings on the pfsense and on the client. We tried rebooting all devices as well as the esxi server on which the server and pfsense were hosted upon.

How to fix slow transfer speeds on pfSense and OpenVPN

REQUEST HELP WITH THIS ISSUE 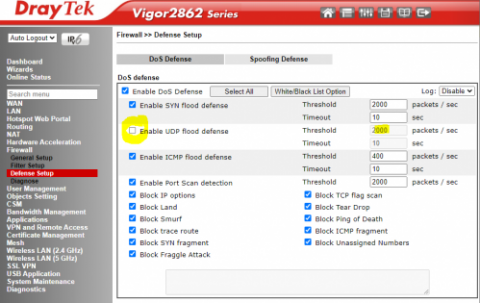 This was a simple fix in the end and may not apply to your own environment. As pfsense is a highly tested appliance, it was likely not to be the cause of the error. I suggest looking at your own networking equipment on both sides first before anything else. For us, it was the Draytek router on the client side.

Navigate to your routers web console via it's IP address in a browser window and log on.

Under the section Firewall / Defence Setup, do one of the following;

Either Disable UDP Flood Defence or Set the Threshold to a higher value.

By default, openVPN uses UDP for the tunnel. You may find that your own networking equipment, be that a router, hardware firewall or software firewall may be limiting the connection through a protection mechanism.